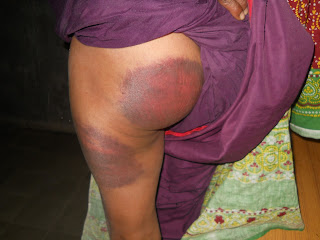 Recently the salesman of the public distribution outlet in village Chapria some forty kilometers from Alirajpur district in Madhya Pradesh took out all the wheat, rice and sugar meant for subsidised distribution to the villagers during the night on 2nd February, 2011 and then lodged a complaint with the Police outpost in Phoolmal village nearby that some unidentified thieves had stolen the foodgrains and sugar. The policemen from the outpost then made a visit to Chapria village on 9th February in search of a person named Kalia and not finding him caught hold of his wife Vechli and gave her a solid caning on her buttocks and thighs and left her writhing on the ground. When her cries brought the other villagers to her house the policemen threatened them with dire consequences if they did not bring Kalia to the outpost and returned.

The villagers next day instead of visiting the police outpost took a circuitous route to Alirajpur and came to the office of the Khedut Mazdoor Chetna Sangath. Shankar, the secretary of KMCS immediately had an application prepared and went with them to complain to the Collector and the Superintendent of Police. The SP, a woman, was aghast at the purple weal marks of the beating on Vechli's body shown in the picture below and immediately ordered her to be taken to hospital and also ordered that the two policemen on duty in Phoolmal Chowki be called for explanations. 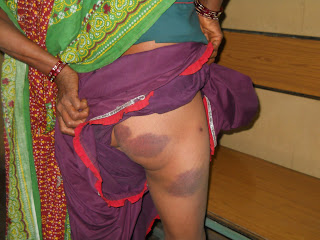 The media too were given the story and the next day the papers were full of it. While all this was happening the people came back to the KMCS office from the hospital with the woman saying that the doctor had said that the wounds were superficial and needed only first aid and no hospitalisation. Shankar had to rush back to the hospital and give the doctor a dressing down to get the woman admitted.
The huge negative publicity in the press forced the administration to suspend the PDS salesman and also announce that special efforts would be made to see that the foodgrains, sugar and kerosene did indeed reach the people and were not siphoned off. The official enquiry regarding the culpable police personnel is still going on. It remains to be seen what the Police action is against their own culprits.
What all this underlines is the impunity of the government functionaries which allows them to indulge in corruption and oppression due to the lack of exemplary punitive action by higher authorities who are in turn bound less by rules and more by the interests of scammers. There are only a few areas in this country where there are organisations like the KMCS that can challenge this impunity in any effective manner. That the KMCS now has the power to do so is because its members have fought for many years and borne much suffering to build up this power. Even so this power is tenuous because if the state decides it can, at anytime crush, the organisation. So democracy is not something that can be easily established when there is a huge centralisation of economic and political power and needs much greater people's mobilisation than there is at present.