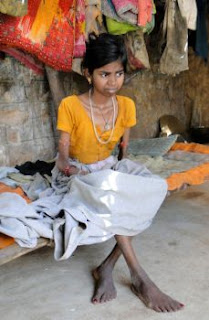 Sano, 20, of Undli village has been reduced to a skeleton in barely a year. She contracted silicosis working in a quartz-crushing factory in Balasinore, Gujarat.

Alirajpur (Madhya Pradesh): “Slowly, but surely, every one of us who has been to the factories in Gujarat will die, and there is nothing we can do to change that,” Buddha (45) of Undli village says bitterly.

Buddha lost his 18-year-old-son Mohan to acute silicosis a year ago. His 16-year-old daughter Ghamma is still suffering from the disease.

Silicosis, the deadly scourge unleashed upon migrant labourers of Alirajpur, Dhar and Jhabua districts of Madhya Pradesh by quartz crushing factories in neighbouring Gujarat, is an incurable and irreversible respiratory disease most commonly caused by inhaling free crystalline silica or silica dust.

The labourers who work in these factories inhale it for about 8-12 hours everyday for a period of three months to a year.

According to the National Institute of Occupational Health (NIOH), “quartz grinding is one of the deadliest occupations causing exposure to almost 100% free silica leading to silicosis in a matter of few months.”
Silicosis is a strange disease that may take from a few months to a few years to manifest itself.

In Madhya Pradesh, it has assumed a class character: that of a disease almost exclusively affecting migrant labourers. Further, it's a disease that kills not just individuals, but entire families.

According to Shipi Kendra, an organisation working to spread awareness about silicosis in the region, the disease has orphaned at least 105 children in just 10 villages of Alirajpur and Dhar districts.

Lure of the lean season

Every year during the agricultural lean season, thousands of Bhil and Bhilala tribals from Alirajpur and neighbouring districts migrate to Gujarat's Godhra and Kheda districts.

The migration started in the beginning of the last decade when labourers from Gujarat refused to work in the hazardous factories.

The labour gap led contractors from Gujarat to Alirajpur in Madhya Pradesh where the prospect of making ends meet during the lean season lured droves of tribals to the quartz-crushing factories in Godhra and Balasinore.

The trend of migrating to silicosis factories has continued over the last decade and has taken Jhabua, Dhar and even Barwani districts in its grip.

But why do people continue to migrate knowing that working in the factories is fatal?
The situation in Alirajpur is not very different from other districts of the State where tribals, having lost their traditional means of livelihood, have been reduced to migrant labourers.

“It is an easy job,” says Gopal (20), a migrant labourer. “All we have to do is fill up gunny sacks with white stone powder. We manage to fill about 600-700 sacks a day.”
The workers get paid Rs.1.50 to Rs. 2 a sack for their labour and compared to other “hard” jobs such as those in construction industry, filling up gunny sacks does come across as less strenuous.

However, the killing nature of this “easy job” reveals itself much later in symptoms that include short breath, severe weight loss, coughing and difficulty in performing the simplest of physical exercises, even walking.

The villagers of Undli realised that the sudden decline in health and the eventual death of healthy young men and women were fallouts of their stints in quartz factories only after the funeral of the first few casualties.

“The entire body would burn except for the lungs. It was shocking,” says Kesar Singh, husband of the village sarpanch Sharmila.

The Mahatma Gandhi National Rural Employment Guarantee scheme has failed to curb migration effectively. The most common reason for workers to prefer the “factories of doom” over the MGNREGA is timely wage payment.

“The total number of deaths in Alirajpur district is 277. It is the lure of earning easy money in a short duration that makes them migrate to Gujarat,” says Ashok Deswal, District Collector Alirajpur.

“Besides various awareness campaigns, we have organised 24 medical camps. We have also provided assistance to affected persons under several government schemes like the Deendayal Antyodaya health insurance card, and regular pension. Ten beneficiaries have also been provided over Rs. 2 lakh under a self-employment scheme,” he says.
For all the tall claims, the government's efforts seem half-hearted at best. While any signs of awareness campaigns — posters, wall paintings or hoardings — were hard to come by even at the district headquarters, the health insurance card in question does not even cover silicosis.

Health Commissioner of Madhya Pradesh Dr. Manohar Agnani agrees that the problem is acute.
“We have asked district authorities from Alirajpur, Jhabua and Dhar to send us a detailed proposal addressing this issue. We have also involved NGOs active in this area for more inputs. As soon as we receive the proposal, we will plan our next course of action,” says Dr. Agnani.

In November last, the National Human Rights Commission issued a show cause notice asking the Gujarat government why it should not be held responsible for compensation to the families of 238 silicosis victims belonging to Madhya Pradesh.

However, the compensation process seems to have become stuck in red tape. Wrangles have broken out among the NHRC, and the Gujarat and Madhya Pradesh governments.
“Right now the government is in correspondence with authorities at various levels on the issue of compensation. Nothing has been finalised yet,” Dr. Varesh Sinha, Additional Chief Secretary (Labour), Gujarat told The Hindu.

NHRC member P.C. Sharma told The Hindu: “The authorities concerned — be it the labour, health or social welfare department — need to take this matter very seriously as silicosis is a fatal disease and the labourers who get affected have nobody to turn to even as we keep doling out crores to cricketers. The working conditions of the factories are pathetic and it is the State's responsibility to protect the workers from this exploitative industry.